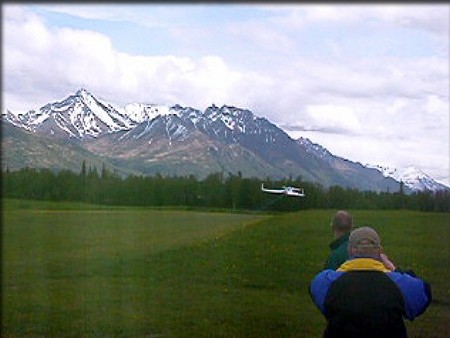 This is one of the marginal takeoffs, at the end of a 300 foot runway, (!) before the canard issue was completely resolved. The Berkut flew, but had almost no elevator authority. The model would descend in turns, so I had to carefully level out to climb, then resume the turns. This was exciting to watch, because the plane was at full power all the time, and it is fast!

I flew some of the test flights, and also had a good friend, Steve Mclaughlin, do some of the test flights. Steve is a remarkable pilot, who happens to be Alaska State Champion for several years running, in both Pattern and IMAC. I was honored to have him fly the plane, and his exceptional judgment and skill made them successful without damaging the model. Thank you Steve! 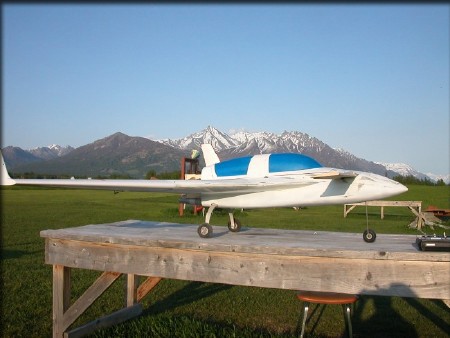 We have one of the most beautiful flying fields on the planet, in Palmer, Alaska. Here, you can see I've lengthened the nose gear, to see if that would help the plane rotate. Once the canard problem was solved, (below) this was no longer necessary. The landing gear shipped with the kit is shorter, and allows the model to sit in a normal, horizontal attitude. (The cowling wasn't finished at this stage. That's why some of the prototype photos don't show it attached.) 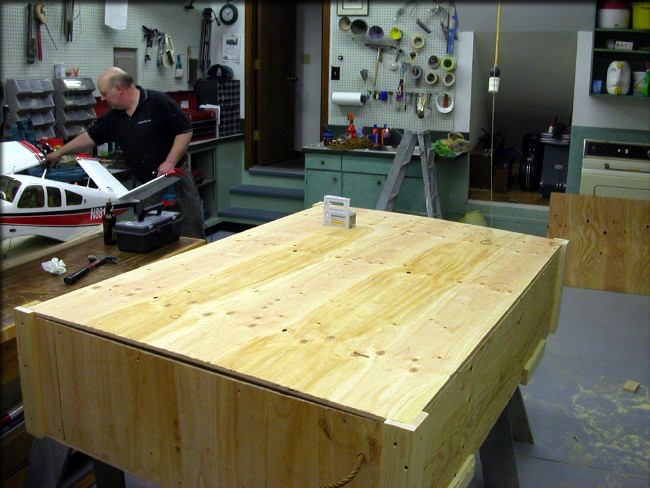 At this point, I had done enough testing to know that the design would work, and that the only thing remaining was some detail with the canard. So this was my earliest opportunity to get the molds and other materials shipped out, to begin production. Once again, my good friend Greg Weeks came to the rescue by helping me build this crate. This was a HUGE, about the size of a piano. (Lots of padding) 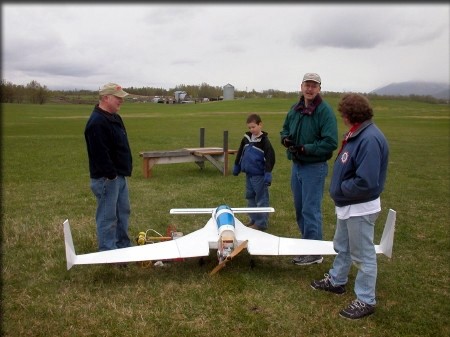 All the pilots I spoke with had opinions about how to increase the elevator authority. I thought it was the airfoil. Some thought it needed more power. Others thought it was the CG. I finally spoke to another friend of mine, Fred Keller, who used to work with Burt Rutan. Knowing that (all things being equal) you get more lift per degree of angle of attack from a given amount of area by increasing it's span, rather than it's chord, that was the decision I made. The span of the canard was increased to 50 inches, and the airfoil was changed from the "Clark Y" to an Eppler 197. The E197 is an "old friend", used on many successful models in the past, and it turned out to be just what the plane needed. 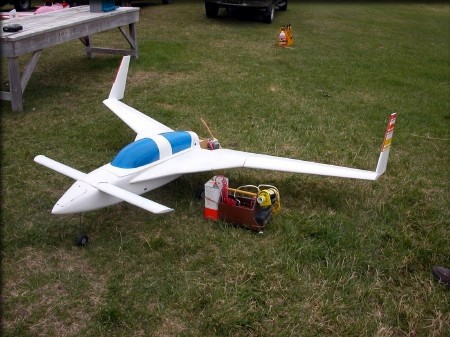 Since canard aircraft generally have a wider safe CG range, and the model had already proven to be very stable, I decided to move the CG rearward about 1 inch. This let me take a full pound of weight out of the nose. (Original test flights, with a simple fiberglass canopy and no scale cockpit detailing, had required 2 pounds of weight in the nose to achieve the factory-recommended CG on the actual aircraft.) This canard change and CG move turned out to be IT. Takeoffs now only took 100 feet, instead of 300 feet, and the Berkut climbed out strongly. Steve was able to trim it for hands-off flight with nearly neutral trims, and could tell immediately that he had plenty of elevator authority. Kit builders who detail the cockpit will probably be able to balance the model with little or no ballast, which was the original design goal. An unexpected deadstick landing proved that the model had good elevator authority, even as a glider.

First, we did all the scale-type maneuvers we would expect modelers to do in competition, including gentle turns, rolls, climbs, descents, etc.. Then we gradually increased the force of the turns, and did high-speed, full-elevator pull-ups, to insure that the structure was strong. Finally, we did high speed loops, rolls, and stalls, all showing no bad habits. In a stall, the model simply behaves like the actual airplane, and settles into a flat descent. This was the performance we were seeking, and we finally achieved it. This was finally a fast, responsive, and stable model.

Another shot of our beautiful flying field. with the participants in an IMAC contest. The winner, and my favorite test pilot, is Steve McLaughlin, the second person from the left. He won with a gorgeous Extra (and a lot of skill) from Composite-Arf.com

That about covers the design/building/test flying process. But, as of today, there are many sad and unresolved issues related to this project. If you have followed the discusssions on RC Universe, (my favorite RC forum) and would like to know more about the adventure which has become known on the net as "The Fusco Fiasco", click the image below for the complete story. If you're considering marketing one of your original designs, this might serve to enlighten you as to what not to do.

I'm completely out of the fabrication business. I have no kits, plans, or parts of any kind for sale... only 3D models, and tutorial CD's. Click here, or on the "Products" link to see descriptions and movie previews of them.